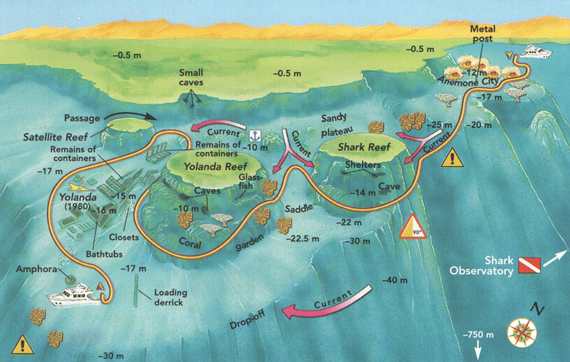 Is the famous national park in Egypt and one of the most famous diving sites in the world, located at the most southern tip of the Sinai Peninsula about 20km west of Sharm El Sheikh
Due to its juncture of the gulf of Suez and the gulf of Aqaba, the combining waters of diverse salinity from each gulf has resulted a wonderful composition of rich reef and gathering of many pelagic fishes.


Shark Reef and Yolanda Reef the most famous spot of Ras Mohammed.
Formed by two twin mountains, looks like big pinnacles appeared from the sea bed, a huge school of barracuda and snappers are residents, while other big pelagic fishes and sharks can be seen. Yolanda surrounded by a plateau of average 15 m depth, where there are so many kinds of coral fishes, giant moray eels, sting rays, bat fish, scorpion fish and much more to see. At the shallow west side Yolanda wreck is found with its cargo of standard toilets, bath tubes and pipe tubes.
Other dive spots of Ras Mohammed:
Anemone City - Ras Ghazlani - Ras Zaatar - Jackfish Alley - Shark Observatory 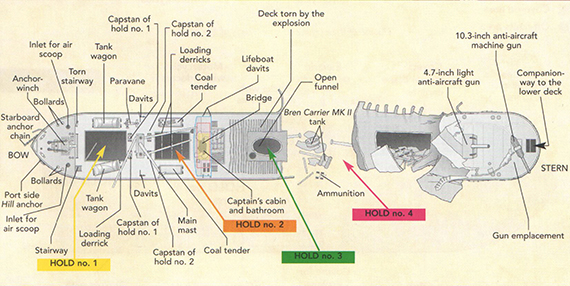 Located on the west coast of the Sinai Peninsula average 40 km north west from Sharm El Sheikh, and discovered by Cousteau in 1956.
Ranked as one of the world's best wrecks and the most exciting wreck in the Red Sea.
The SS Thistlegorm (128 m long) was built in Sunderland by Joseph Thompson & Sons shipyard and launched in April 1940,. After its construction the ship was armed with 120 mm anti-aircraft gun and heavy-Calibre machine gun.
It was sailing from Glasgow (Scotland) on the 2nd of June 1941 heading to Alexandria (Egypt) as part of a convoy via Cape Town, at the 6th October 1941 the Thistlegorm was sank after being hit by 2 bombs from a long range German bomber, the hit only blew a hole in the port side.
The ships cargo included, Bedford trucks, armored vechiles, BSA motorcycles, two tanks, two locomotives, railway wagons, boots and spare parts for planes and car - Literally an underwater museum!
The marine life around the wreck is astonishing, as it is surrounded by a group of Batfishes, Barracudas, Snappers, Jacks, gropers, resident turtles and many small coral fishes 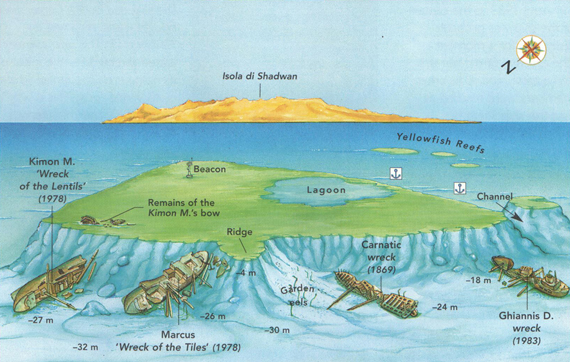 Abu Nuhas is a large triangle shaped reef located 3 km north west cost of Shadwan island, 40 km north of Hurghada.
The reef has a dangerous location for unlucky ships due to the reef position is close to the navigational route of Suez Canal.
There are four wrecks that are suitable for recreational divers:
Giannis D: Built in Japan in 1960, 100m long and sank on the 19th of April 1983. The cargo was timber, the ship lies between 13m till 24m deep, penetration is possible from the stern and from the engine room at 15m deep, while the scene inside the engine room is breathtaking due to the clouds of the glassfish. The bow and the stern are in good conditions but the middle is almost destroyed, usually dolphins are seen around the wreck, groupers and moray eels.
Carnatic: Considered to be one of the oldest wrecks in the Red Sea. An old wood sale ship built by the British and sank in 14th September 1869 at its route to India, the ship was laden with gold, wine and cotton. The wreck is 90m long and lies on 22m deep, the wreck skeletal looks like some remains of a giant whale and among the ribs full of glassfish, nudibranchs and soft corals, which gives perfect conditions for photographers.
Chrisoula K: Is a Greek cargo vessel 98m long, it sank on 31 August 1981 and was laden with Italian floor tiles. The stern lies at 26m and its bow at 3m deep, penetration inside the engine room is possible but cautious should be taken due to the obstructions such as fallen beams and poles.
Kimon M: Is a German cargo vessel 106m long built in Hamburg 1952. Sank in 12 December 1978 and was laden with 4,200 tons of lentil. The stern lies at 32m and its bow at 15m deep, the ship sat upright on the reef but later on currents and wind pushed the ship into the deeper water on its starboard side, penetration is possible inside the engine room.